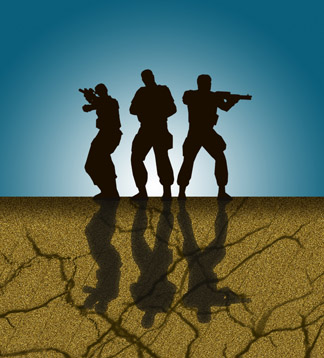 There was an article in The Washington Times, written by Bill Gertz on February 28, 2011.

The title of the article is Financial terrorism suspected in 2008 economic crash. http://www.washingtontimes.com/news/2011/feb/28/financial-terrorism-suspected-in-08-economic-crash/

There are two sides to this article – a plus and a minus.

The strength of the article lies in the fact that it has the guts to explore a report, done for the Pentagon, that offered several possible scenarios in which countries, groups or entities could have intentionally caused and / or exacerbated the financial crisis of 2008.

Looking at the crisis as a possible act of economic terrorism, the article opens the door to the possibility that the financial crisis didn’t “just happen.”

In other words, there is a certain confront of evil here that is usually missing in the main stream media.

The problem with the article is that it forwards a hypothetical agenda that leads people in the wrong direction. Let me explain. The article is based on a report, written in 2009 by a Pentagon contractor, which was called “Economic warfare: risks and responses.”

To quote the news article, “While economic analysis and a final report from the federal government’s Financial Crisis Inquiry Commission blame the crash on such economic factors as high-risk mortgage lending practices and poor federal regulation and supervision, the Pentagon contractor adds a new element: ‘outside forces,’ a factor the commission did not examine.”

But the “outside forces,” it names are simply suspects that are possible “financial enemies.” According to the report, these include Middle Eastern states, Islamic terrorists, members of the Chinese military and perhaps Russia, Venezuela, or Iran.  But this is all conjecture.

The report looks at the possibility that some of these countries or groups (enemies all) could have been involved in acts of economic terrorism during the financial crisis.

Eh…excuse me; this is supposed to be high level military intelligence?

The one solid fact in the article is that covers the ground that there was some manipulation of the stock market during the height of the crisis which helped drive the stock market down faster and deeper than could have possibly have happened otherwise. But this data has been well covered elsewhere.

Unfortunately, the report by its very nature is a mis-director because those that it suggests as perpetrators are wrong targets. And this kind of high level “report” causes people to go chasing these bad hats for something, which in this case, they didn’t do.

As has been made clear in a Crisis by Design, the orchestration of the financial crisis was conducted by the Bank for International Settlements. It was international bankers that pushed America to the brink in order to install itself and as the planet’s “Global Monetary Authority.”

So while this article has the plus point of suggesting that there were active, causative factors in creating the financial crisis, it offers a cadre of all too predictable military and political enemies to the altar of media trial, conviction and execution.

The financial crisis was created. And let’s be clear: the entity behind it, The Bank for International Settlements, is still working to consolidate its power over the planet’s finances.

We will continue to expose the machinations of the BIS and offer solutions that will help restore the global financial system to one that will benefit mankind, not a self-anointed few.