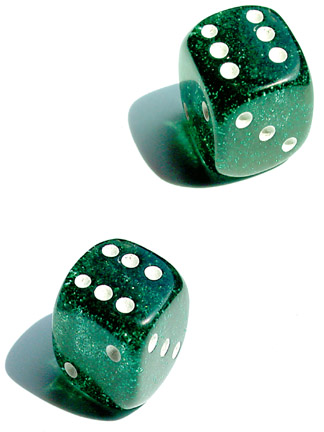 A Credit Default Swap (CDS) is a fancy name for a financial instrument that is really nothing more than a bet on whether a loan will be repaid or not. They are wagers placed by bankers and other pinstriped bookies made in an enormous floating casino with virtual crap tables in the U.S., Europe, Asia, and the Middle East.

In the simplest terms, credit default swaps are wagers as to whether or not some entity – a government or a corporation – will repay a loan in the manner in which they have agreed.

Governments and corporations borrow money by issuing bonds, which are promises to pay – IOUs.

Here is a simple example of how a CDS might work: The country of Greece (like virtually all governments on this debt ridden planet) spends more than it rakes in in tax revenues. To cover the short fall, it borrows. It does this by selling government bonds of one kind or another.

To make the purchase of the bonds a more secure investment, an investor is likely to purchase a credit default swap, which guarantees the repayment of the bonds from the seller of the swap, should the government default.

The investor pays a fee to the issuer of the swap, much like an insurance premium.

While it acts like insurance, a credit default swap isn’t an insurance policy – not technically. It is an agreement, a guarantee, issued, for example, by a bank or an insurance company, to pay the amount due to the investor if Greece defaults. Kind of like a co-signer. This transfers (swaps) the risk from the government to the entity issuing the guarantee. (Thus the name, Credit Default Swap).

But the betting doesn’t stop there. Oh no.

Goldman Sachs, the unethical, but obscenely profitable New York investment bank, decides to place a bet that the Greek government will have a hard time repaying its bonds and, in fact, won’t repay them as promised.

(Would Goldman leak information to the financial press that the Greek economy is actually in worse shape than it appears so they can win the bet and pocket a few billion? Nah.)

Still others can place bets on the Goldman / Deutsch Bank swap. Bets like these, where the gamblers have no interest in the underlying security, are called “Naked Swaps.”

This market is a ginormous, pyramiding Ponzi scheme. The face value of outstanding credit default swaps globally is currently about $30 trillion. That’s trillion with a “T.”

A major market for credit default swaps in recent months has been the PIIGS – Portugal, Ireland, Italy, Greece and Spain. These are the hobos of Europe hanging out in the back streets of Frankfurt with their tin cups extended to the European Central Bank. The cost of default swaps in these countries has skyrocketed recently.

“The cost of insuring against default on Portuguese and Spanish government debt soared to record-high levels as an aid package for Ireland failed to reassure investors the region’s debt crisis will be contained.”

As the full extent of their fiscal insolvency comes to light,  the premium on the credit default swaps of the respective countries climbs. In other words, the cost of “insurance” to protect an investor from one of these governments defaulting increases as country’s solvency decreases.

All of which brings us to this statement issued by The Committee for a Responsible Federal Budget on May 27, 2011:

Trading of credit default swaps (CDS) insuring U.S. treasuries has doubled in the last year in response to fears over our inability to deal with our debt and deficit problems in addition to fears about lawmakers not raising the statutory debt ceiling to avoid a U.S. default.

Increased trading suggests a higher level of fear over U.S. default on its debt obligations….Average daily trading just jumped to $490 million last week from $10 million the week prior, putting the U.S. at fourth most traded among those tracked by DTCC — up from 633rd!

This is a staggering turn of events – a further indication of the country’s fiscal free-basing. You can see the increase in the cost of credit default swaps on U.S. debt (Unheard of!) on the chart below. 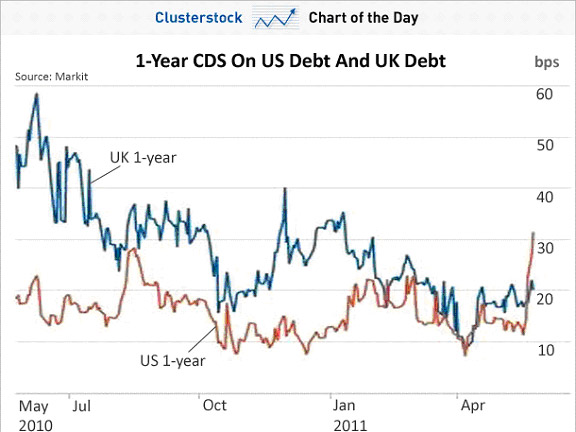 (The chart was published at www.Clusterstock.com, but was created by Markit, www.markit.com – the definitive source of information on credit default swaps.)

What does this mean to you and me?

It means interest rates must rise. I say this knowing that helicopter Ben Bernanke, is doing everything he can with the awesome power of the U.S. Federal Reserve bank to keep rates down. Congress keeps spending money it doesn’t have. The Treasury turns around and borrows the money to cover the spending.

And who is buying Uncle Sam’s IOUs? Benny and the Feds. The Fed is feasting on federal debt like a pack of hyenas on the fiscal carcass of the American Republic.

Meanwhile, the Chinese, with $3 trillion in reserves, have been dumping U.S. debt like a bad habit. This will spread as time goes on, and Benny and the Feds will not be able to stem the tide of rising rates.

Unless or until, the United States Congress can get its financial house in order, America’s position as the world’s leading economic power will continue to erode.

This is so obvious a five year old can see it. Yet there are those in Congress who actually believe that it is the government’s job to “take care of people”: to feed them, house them, to look after their mental health and to provide them money when they don’t work. They hold this frightening concept of government without any regard for the solvency of the entity that is supposed to pay for it all.

It is economic Seppuku, but they are apparently oblivious to the knife that they are sliding into the body of the nation.

To say that America is at her seminal crossroads is now a hackneyed cliché. Yet, nothing could be truer.

If your elected officials don’t understand this, you should burn the phone and fax lines until they do.

Meanwhile, in the not too distant future, I expect interest rates to rise; I expect precious metals to resume their bull market trend, and I expect that Congress (the Senate, really) will kick the budget ball down the road for others to confront unless we can change their collectivist minds.