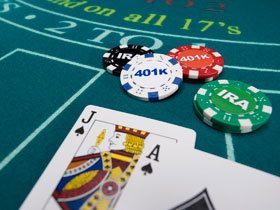 Don’t look now, but such a plan is in the early stages of development.

It will start voluntarily, but I predict that the time will come, when the government will do this to “protect” you from your own financial crisis.

In Crisis by Design, I raised the prospect that the government had a long-term strategy designed to take control of the retirement accounts of individuals. This would include IRAs and 401(k)s.

A government cannot operate with trillion-dollar-a-year budget deficits and not turn on its citizenry to confiscate money and assets in order to cover their compulsive spending.

The first overt indication of this plan is covered in chapter five of Crisis by Design, where I discuss the testimony of Teresa Ghilarducci of the Schwartz Center for Economic Policy Analysis (an organization funded by the Rockefeller Foundation) before the House Education Committee in 2008.

What she proposed was a plan called Guaranteed Retirement Accounts in which the Social Security administration would convert your assets into Treasuries (government IOUs) and manage your retirement accounts for you.

Her proposal was “voluntary.” But once the government starts down that road and can get its hands on the trillions of dollars that are invested in IRAs and 401(k)s, all it will take will be some massive drop in the stock market to give government an excuse to manage your assets and protect you from the “whims” of the stock market.

Following Ghilarducci’s testimony in 2008, last year the Department of Labor and the Department of the Treasury held open hearings on this concept of guaranteed retirement accounts. And last month, during the State of the Union speech, President Obama actually made reference to this kind of plan.

Sound outrageous? The following is a link which contains this short section of Obama’s State of the Union speech. Check it out. http://www.goldworth.com/human_events.html

The video is embedded in an advertisement for a company that sells precious metals. I am not promoting this service; the source I recommend for precious metals is in Chapter six of the book. But the video is very telling.

This is presented as all “for your own good,” and as a way to protect you from the “whims of the stock market”. Trust me, it is nothing more than an effort to fund government borrowing with your retirement assets.

Congress has raped and pillaged the Social Security trust fund. And there is no reason to believe they would do anything differently with your retirement assets in there.

I am I’m not sending this out to create a panic over the fact that the government is going to confiscate your retirement accounts tomorrow. The formal structure of the government’s plan hasn’t even been put in place yet. But it is coming, and once this program is in place, even on a “voluntary” basis, I would consider your IRAs and retirement accounts at risk from your debt-oholic Uncle.

Check with your CPA to see what the tax consequences would be if you moved your assets out of your retirement account. At least be armed with the information so that if you have to pull the plug on your IRA or 401k in a hurry, you can do so.

Permission is granted to repost this article in its entirety with credit to John Truman Wolfe and a clickable link back to this page.

One Reply to “Financial Crisis Getting Very Close To Home”