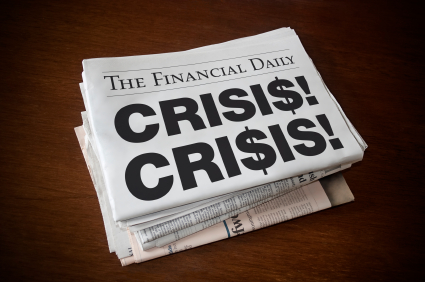 A jet airplane is screaming across the sky at the speed of sound (about 750 miles per hour). A stream of green paper begins reeling out behind it.At the speed of sound, it would take 14 years before it reeled out one trillion dollar bills. Seven hundred and fifty miles and hour – fourteen years.

Let me put it another way: if you were to spend a dollar every single second, it would take you 32,000 years before you spent one trillion dollars.

This might not be on your reincarnation agenda, but you get the idea: Thirty two thousand years.

In the first two years of the Obama administration, the budget deficits have totaled $2.7 trillion. The U.S. budget deficit this year (2011) is projected to be $1.5 trillion dollars.

This is the deficit – the amount of money being spent BEYOND our income. Our friends in the Chinese Communist Party have been keeping the US government afloat by buying our IOUs  (Treasury bills and bonds). This covered the deficit spending. Now they are cutting back.

Others who buy our debt are doing the same. As a result we have to offer higher rates to attract investors, so interest rates are rising.

The government won’t stop spending any more than a heroin addict will walk away from the needle.

All of which means that the government has to find a source of funds to feed its addiction.

There is a section in chapter five of Crisis by Design, which talks about the government’s possible confiscation of retirement accounts (IRAs and 401Ks). This was based, in part, on testimony before a Congressional committee in 2008 promoting a program of this nature. At first blush, the very idea seems outlandish. Could never happen but you need to be informed to avoid your own financial crisis .

Don’t look now, but Argentina buried itself  in so much debt, it did exactly that – nationalized the personal retirement accounts.

And now, Hungry, Bulgaria, Poland, France and Ireland have gotten into the act.

Could never happen here, you say. But then perhaps you missed the fact that the U.S. Departments of Labor and Treasury held hearings on this exact subject a few months ago.

All of which argues for you to get ahead of the curve on this and sit down with your tax advisor and estimate what it would mean to you tax wise to take an early distribution of your retirement plan.

If this occurs in the United States, it won’t be next week. And I am not suggesting you take an early disbursement; I am suggesting that, given the current state of the government’s budget deficits and the international trends in this area, you get sufficient information from your tax professional to make an informed decision.

Do that and keep your powder dry.

5 Replies to “Financial Crisis Gets Very Close to Home”