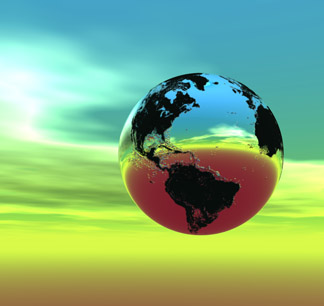 I don’t like the way it tastes, or feels or smells.

It evokes a world of human misery ruled by some unseen Orwellian tyrant that promotes the glories of “The State” and an obligatory global authority that is, “For the Good of All.”

But that doesn’t mean that globalization of the planet’s economy is some kind of media fiction. It is not.

As a new financial crisis roils through the PIIGS (Portugal, Ireland, Italy, Greece and Spain), the perilous ramifications for U.S. investors are disturbingly real.

Many look at the riots currently sweeping Greece (and soon to be visiting the rest of the pig farm) and think it has little or nothing to do with Joe the Plumber. But the global economy originated on our shores and we could no more prevent its reciprocal flows than the city of New Orleans could have stopped Hurricane Katrina.

The Rockefeller-Rothschild banking cartels of the 18th and 19th centuries sank their fangs into the financial juggler veins of Western Europe and then, in the early 20th century, America. These countries now find themselves piteously buried in debt from which the banking Cosa Nostra exacts trillions in interest, and exercises political control of most of the governments of earth.

One need only look at the Faustian drama now playing across the American media, which is centered on America’s $14 trillion debt. Both sides readily agree: “The debt limit must be raised.”  They are only arguing now on the terms to do so.

So immersed is America in the grip of federal dependency, that the government cannot even bring itself to stop borrowing.

The play is actually a tragedy, not a drama, since the interests of America are subjugated to the lenders.  If America were a corporation, the bondholders would take a haircut and learn not to lend to a government addicted to the power to spend, or it would declare bankruptcy and “reorganize.”

The Global Financial Crisis of 2008-09, which was targeted at the United States, was a stunning success from the viewpoint of those that caused it (see www.crisisbydesign.net), and it is, of course, still very much with us.

The second act of this play is now being played out in the PIIGS – those countries most buried in debt.

The leading glutton, the country now sucking France and Germany into a plan to handle their fiscal insanity, is Greece, though they are not alone.

The financial crisis in Greece, and her sisters of the fiscal swine, affect American investors in the following way:

The big banks in Europe have purchased debt from the PIIGS.

That means that Portugal, Ireland, Italy, Greece and Spain have spent far beyond their income and, in order to cover the shortfall, have issued government bonds to cover the soaring deficits.

All tolled, banks in the healthier European countries own roughly $1.5 trillion worth of government bonds from the PIIGS.

“So what?” says Joe. “Those banks want to buy that junk, that’s their problem.”

If globalization has a focus, it is international finance. And here is how the oh so pathetic bonds from the PIIGS wind their way into the portfolios of American investors

Money market mutual funds are investment vehicles where many U.S. citizens park their cash. These funds buy the debt of governments and corporations. They collect interest on these bonds and other IOUs, take a fee, and pay their investors some interest. These days those rates are pitiful at best.

But here’s the “smoking gun.” In order to increase the rates that these money market mutual funds pay their investors, many of them have been buying the commercial paper (corporate IOUs) from the banks of Western Europe.

In fact, according to Grants Interest Rate Observer the five largest U.S. money market mutual funds have about 41% of their assets in banks of Western Europe.

Just to be sure the connection is clear, the scenario is as follows:

European banks are loaded with roughly $1½ trillion dollars worth of government debt from the pig farm.

The five top US money market mutual funds have roughly 41% of their assets tied up in the commercial paper of European banks. 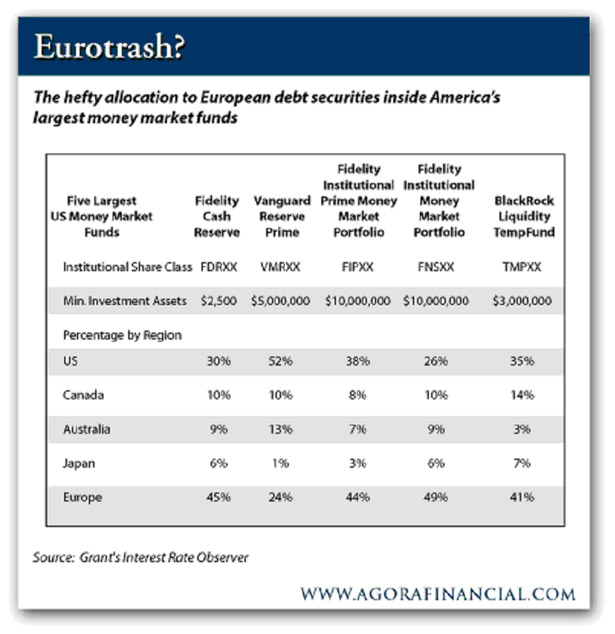 Bottom line: Money in these money market mutual funds could be at risk.