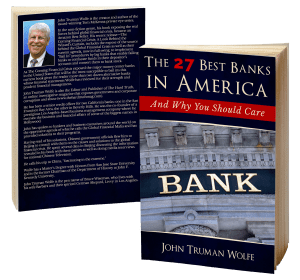 John Truman Wolfe is the creator and author of the award-winning Tom McKenna private eye series.

In the non-fiction genre, his book exposing the real forces behind global financial crisis, became an Amazon Best Seller. His recent release—The Coming Financial Crisis: A Look Behind the Wizard’s Curtain, includes the expose of the source behind the Global Financial Crisis as well as their current agenda, now in full swing, to implement “Bail In” procedures by big banks that enable failing banks to confiscate funds in their depositor’s accounts and convert them to bank stock.

As The Coming Financial Crisis exposed the major money center banks in the United States that will be the most susceptible to bail ins this current book gives the reader more than two dozen alternative banks whose financial statements Wolfe has reviewed for their strength and prudent financial management.

John Truman Wolfe is also the Editor and Publisher of The Hard Truth, an online investigative magazine that exposes government and corporate corruption and abuse (www.thehardtruthmag.com).

He has been a senior credit officer for two California banks: one in the San Francisco Bay Area, the other in Beverly Hills. He was the co-founder of a prestigious Los Angeles-based business management company where he oversaw the business and financial affairs of some of the biggest names in Hollywood.

John has spoken to bankers and business executives around the world on the oppressive agenda of what he calls the Global Financial Mafia and has provided solutions to their programs.

Having read of his solutions, Chinese government officials flew him to Beijing to consult with them on the causes and solutions to the global financial crisis. He spent several days in Beijing discussing the information revealed in his book with these parties as well as doing media interviews for national Chinese Television.

He calls his trip to China, “fascinating in the extreme.”

Wolfe has a Master’s Degree with Honors from San Jose State University and is the former Chairman of the Department of History at John F. Kennedy University.

John Truman Wolfe is the pen name of Bruce Wiseman, who lives with his wife Barbara and their spirited German Shepard, Livvy in Los Angeles.